Basalt » What Is Basalt? What Is It Used For?

Basalt is Earth’s most common volcanic rock covering 90% of the planet’s surface. Each year, an estimated twenty volcanoes erupt and produce large quantities of basalt lava. From oceanic tectonic plates to ocean ridges, oceanic islands to oceanic hotspots, basalt is found in abundance.

If you want to learn more about what is basalt, you have come to the right place. In this article, I provide a simple, easy-to-understand guide on this common yet interesting rock. Read on to find out everything you need to know, including how the rock is formed, its characteristics, and the different types of basalt.

How Is Basalt Formed?

The basalt rock on Earth is formed through decompression melting of the planet’s mantle. The weight of rock lying on top of the upper mantle creates high pressure and increases the melting point of the mantle.

This process can occur in several settings, producing basaltic rock with unique qualities. The specific qualities of basaltic rock will tell you about the tectonic setting where the rock was formed, whether in a hotspot, back-arc basin, subduction zones, mid-ocean ridges, or continental rifts.

Settings Where Basalt Is Formed 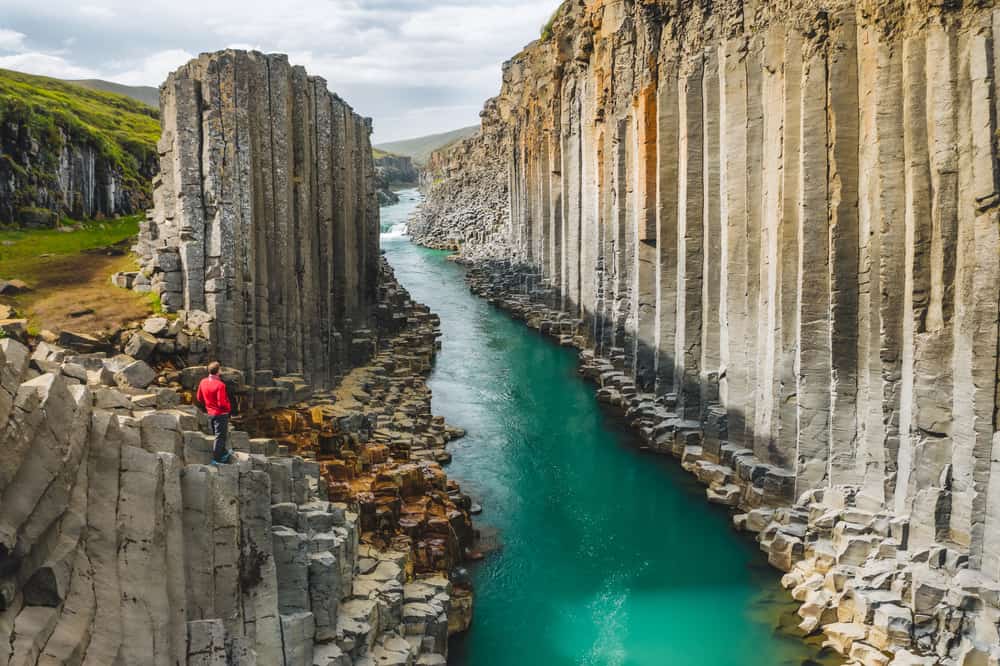 Let’s take a look at the settings where basalt is formed on Earth.

Basalt that forms above hotspots and continental rift zones is known as alkali basalt, as it contains high amounts of alkali compounds. This type of basalt has a low silica content and traces of kaersutite, phlogopite, alkali feldspar, feldspathoids, and titanium-enriched alkali basalts.

Volcanic eruptions that happen in volcanic arcs and subduction zones can result in the formation of basalt rock rich in alumina. The high alumina content can be attributed to the lack of plagioclase and silica. Alumina basalt is similar in composition to a cross of alkali basalt and tholeiitic basalt formed on ocean ridges.

Basalt rock, known as boninite, is high in magnesium and is typically formed in back-arc basic basins. This rock has a low trace-element and titanium content.

Most basaltic rock is found in oceanic islands, ocean floors, and plateaus formed by continental flood basalts. This is known as tholeiitic basalt and contains high amounts of iron and lower aluminum and alkali metal levels.

One type of tholeiitic basalt is formed around mid-ocean ridges (MORB). MORB basalt has a low amount of incompatible elements. Several variations of MORB basalt include E-MORB, N-MORB, and D-MORB.

The Physical and Chemical Characteristics Of Basalt 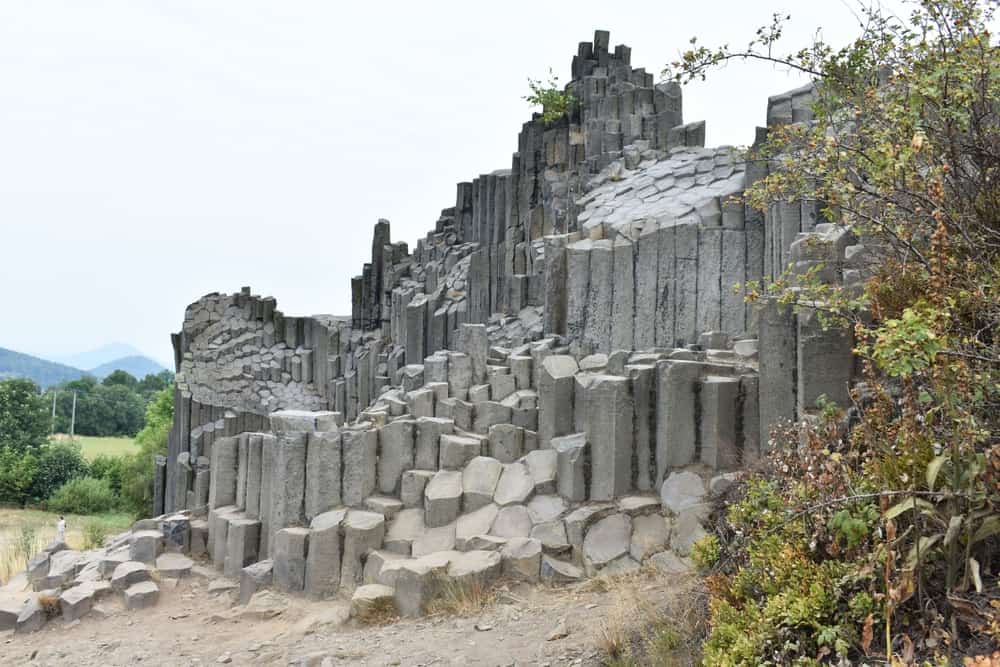 Basalt is a dark-colored rock due to the high levels of dark-colored augite and pyroxene minerals. But, the color can vary significantly, with some types being light-colored due to plagioclase elements. This volcanic rock contains a higher magnesium and iron content and a low silica content. For this reason, basalt is classified as a mafic rock.

A relatively low viscosity characterizes basaltic lava. Basalt lava has a similar viscosity to that of ketchup. The resulting rock has larger crystals on the exterior and a finer-grained composition outside due to the low viscosity.

The rock’s chemical composition includes elements of olivine, augite, and plagioclase, with a high melting point. These elements are usually the first of other minerals in the basaltic lava to solidify, forming larger crystals.

Basalt rock is a type of scoria rock. It is characterized by vesicles or bubble-like cavities on the rock’s surface. The cavities or vesicles are formed when gases erupt from the decompressing lava as it flows to the surface. The lava then cools and solidifies before the gases escape, forming bubble-like structures.

Basalt contains a high amount of pyroxene, feldspar, and olivine. Smaller amounts of iron-titanium oxides, such as ilmenite and magnetite, and iron oxides are also found in the rock.

Like most igneous rocks, the geochemistry composition of basalt is characterized by high amounts of calcium oxide and magnesium oxide and low quantities of silicone oxide, potassium oxide, and sodium oxide.

The tectonic setting where basaltic lava erupted greatly impacts the shape and texture of the resulting basalt rock. The rock’s physical structure and texture will vary whether the lava erupts in the air, into the sea, or expansive stretches of land.

When basalt lava erupts in the air, the result is the formation of lava flows, scoria, or breccia rock. This type of rock will have a lightweight structure with a bubbly texture.

Pyroclastic rocks form when basaltic lava erupts in explosive bursts. This rarely happens because basalt lava is too hot and dense to create enough pressure for an explosive eruption. But, in the rare occasion that this happens, it is because of gas buildup and lava trapped along the volcanic throat. This eruption results from a fan-shaped structure consisting of a mix of breccia and basalt.

Columnar basalt rocks are distinctive structures formed when thick lava flows and cools rapidly. The fast cooling results in the buildup of contraction forces that cause the lava to shrink in a horizontal direction and, in the process, form cracks. The result is fractured columns, some hexagonal while others take on a polygon structure with multiple sides. The cooling rate defines the size of the columns, with smaller columns forming from rapid cooling and bigger ones from slow cooling.

Underwater volcanic eruptions will also result in basalt rocks with distinct shapes and textures. The depth of water will determine the nature of the eruption; the deeper one goes, the less explosive the eruptions. Eruptions closer to the water result in large amounts of gas, steam, and pyroclastic rocks.

Pillow ballast is an example of an underwater rock formed from a submarine volcanic eruption. When the lava comes into contact with water, it forms a pillow-shaped rock with a glassy exterior and fine-grained interior.

What is basalt used for? 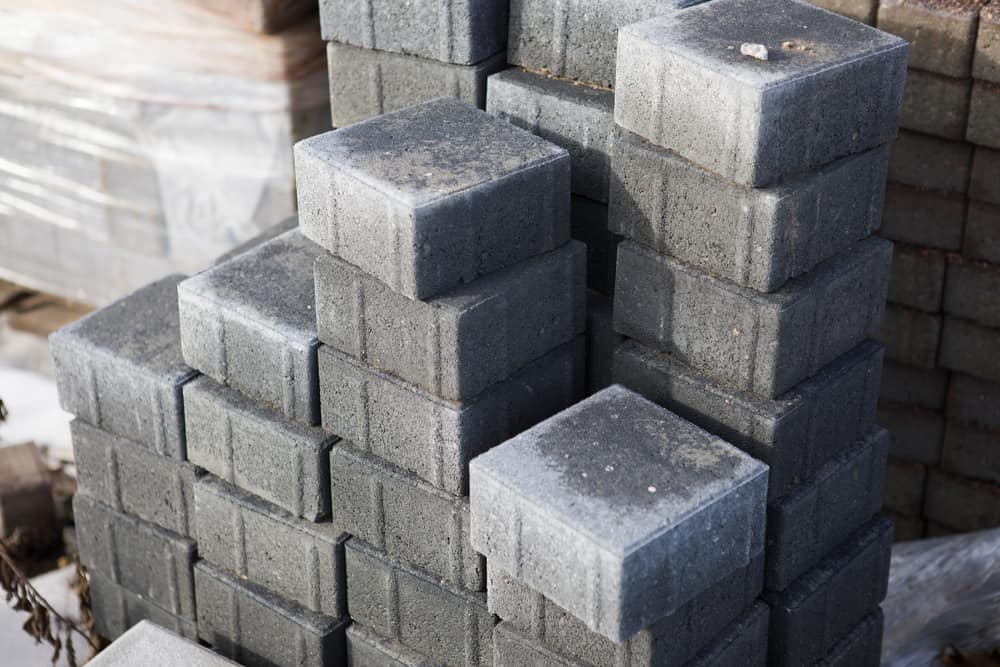 Being the most common rock on Earth, you can bet that humans have found several ways to use basalt. Indeed, basalt has many uses; ancient and modern societies have benefitted greatly from this rock.

Here are a few examples of the uses of basalt:

Basalt rock has an elastic composition, making it the material of choice for preventing cracking in construction projects.

When extruded and heated to be converted into stone, basalt also works as a great thermal insulator, ensuring energy efficiency in a building constructed using this stone.

Crushed basalt is commonly used in civil engineering projects such as asphalt pavement and road constructions. Due to its toughness, it is also used in making construction bricks, tiles, and slabs for building small and massive monuments and buildings. In drainage projects, basalt commonly acts as a filter stone.

Lastly, basalt rock is often used in the creation of statutes. Despite its high density, basalt is highly malleable and used extensively in fine art.

Basalt is one of the oldest rocks on Earth; unsurprisingly, ancient communities used it widely daily. For example, in the Roman Empire, basalt was used to construct seats in public spaces such as parks and stadiums. In the domestic setting, women used basalt rocks to grind cereals. The iconic Rosetta Stone discovered in Egypt by Napoleon’s forces was also made from basalt.

Basalt is a popular material in the industrial sector. This rock boasts a high tensile strength compared to fiberglass. As such, manufacturers use melted basalt rock to manufacture parts such as rebars and pipes used in construction and green energy production.

Farmers worldwide use ground basalt as fertilizer to boost plant growth. Basalt dust can also be a powerful weed controller.

Summary: What Is Basalt?

Basalt is an ancient rock and the most common type on Earth. This rock has many variations in the structure, color, look, and texture depending on where the volcanic eruption of basaltic lava occurred.

Basalt is found on the Earth’s surface, but a large amount of this rock is formed in the deepest corners of the world’s oceans. Its uses range from industrial manufacturing to agriculture, construction, and fine art.