Basalt » 9 Spiritual Meanings When You Dream About Black Snake

Like spiders and rats, many people have a great fear of snakes, so when you meet a black snake in a dream, it can be particularly unnerving.

However, like most things in the spiritual world, it is unlikely that you dreamed about such a creature for nothing – and to help you understand your dream, in this post, we discuss the meaning of dreaming about a black snake.

Dreams and their imagery are such personal, subjective experiences, and a lot depends on what meaning and associations the dreamer has about what they are dreaming about.

That means to be able to decipher the meaning of a dream about a black snake, it will be helpful first to look at the characteristics of black snakes and what they lead us to associate them with.

One of the first things that come to mind when many people think of snakes of any color is poison.

Humans have evolved to have a visceral fear of snakes, largely due to the venom contained in their fangs, and although far from all black snakes are poisonous, we inevitably associate them with danger.

They also possess a reptilian coldness and those staring, soulless eyes, and for this reason, we also associate them with a lack of emotion or empathy. They are alien to us, and we cannot relate to them or connect with them on an emotional level.

Most snakes are well camouflaged, and black snakes in particular are able to hide themselves in the shadows. This, along with their cold eyes and venomous bites means we associate them with hidden, lingering evil.

However, snakes molt, shedding their skins as they grow, and for this reason, they can also be associated with renewal, transformation, rebirth or even immortality.

Snake symbolism according to various cultures 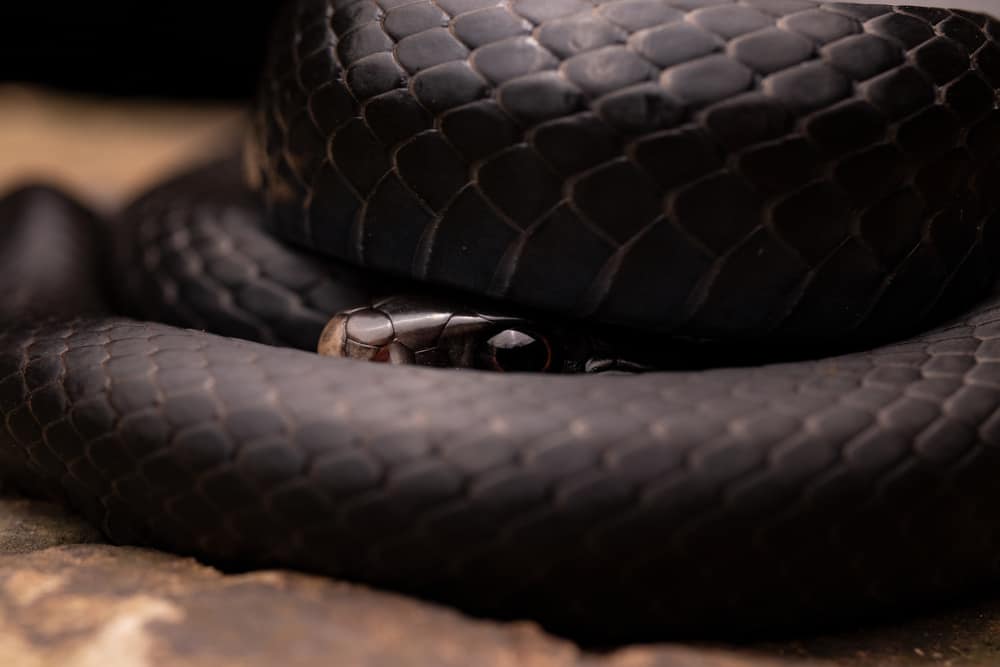 For this reason, it is unsurprising that they feature prominently in the myths, legends and beliefs of many cultures and religions around the globe, and it will be useful to look at this now too to help us understand how to interpret dreams about black snakes.

In China, snakes are often seen as being related to evil, cunning or sycophancy, and many evil beings in traditional stories are described as turning themselves into snakes.

It is considered an ill omen to kill a snake that has made a home in your house.

The minority Ainu people from the north of Japan have a traditional god called Kinashut Kamui who is worshipped by women who have suffered emotional or physical harm thought to come from dreaming about snakes.

In many Southeast Asian countries, the Naga serpent is a common element in mythology and art and is ultimately derived from Indian religion and beliefs.

However, nowadays, many people throughout the region will kill snakes on sight, mostly because they are seen as potentially poisonous and dangerous.

In some countries such as Vietnam, snakes are also soaked in alcohol to make snake wine, which is believed to have medicinal properties.

The Indian subcontinent is home to many species of snakes, so it’s no wonder they are a recurring theme in Indian religion and folklore.

Snakes are worshipped and fed milk during the month of Shravan and especially during the Naga Panchami festival. This festival is observed by Hindus, Buddhists and Jains.

Several important snakes appear in Hindu literature, and Lord Shiva is commonly depicted with a snake around his neck.

In Ancient Egypt, cobras were commonly found in and around the Nile – as they still are today – and were a source of fear and danger for the people living there.

They were also incorporated into the crown of the Pharoah and were worshipped as gods.

In Ancient Greek mythology, snakes appear many times. One of the most notable is as the hair of Medusa, the Gorgon.

Medusa was originally a beautiful maiden, but Athena changed her into a monstrous creature with snakes for hair as a punishment for defiling her temple, and having a head of writhing serpents gave her a terrible aspect.

Another Greek myth talks of the hydra, a creature with many heads in the form of snakes – and when one was chopped off, two more would regrow to take its place.

However, in other Greek beliefs, snakes were worshipped as healers.

Many North American tribes also have beliefs about snakes.

In the Southwest, they are associated with lightning and speed – and are feared for their power.

However, the Hopi Snake Clan use the water snake as their clan emblem and carry out rituals to protect members of their tribe while they are away from home. They are also seen as a symbol of rebirth and regeneration.

In other tribes, they are also seen as representing rebirth and are linked to secrets, rain and healing.

To the Navajo, different colored snakes have different meanings, with the black snake representing dark and the direction north.

Probably the most important image of the snake in the Western world comes from the Bible. According to the story, it was a snake that tricked Adam and Eve into eating the forbidden fruit, ultimately causing the downfall of man.

In this story, the snake represents evil and the Devil, and this has had a great influence on how we view snakes to this day.

However, in another part of the Bible, when the Israelites were being afflicted by snakebites in the wilderness, God told them to place a snake on a stick. After that, anyone who had been bitten but then looked upon this snake would be cured.

This is also related to why snakes are associated with healing. 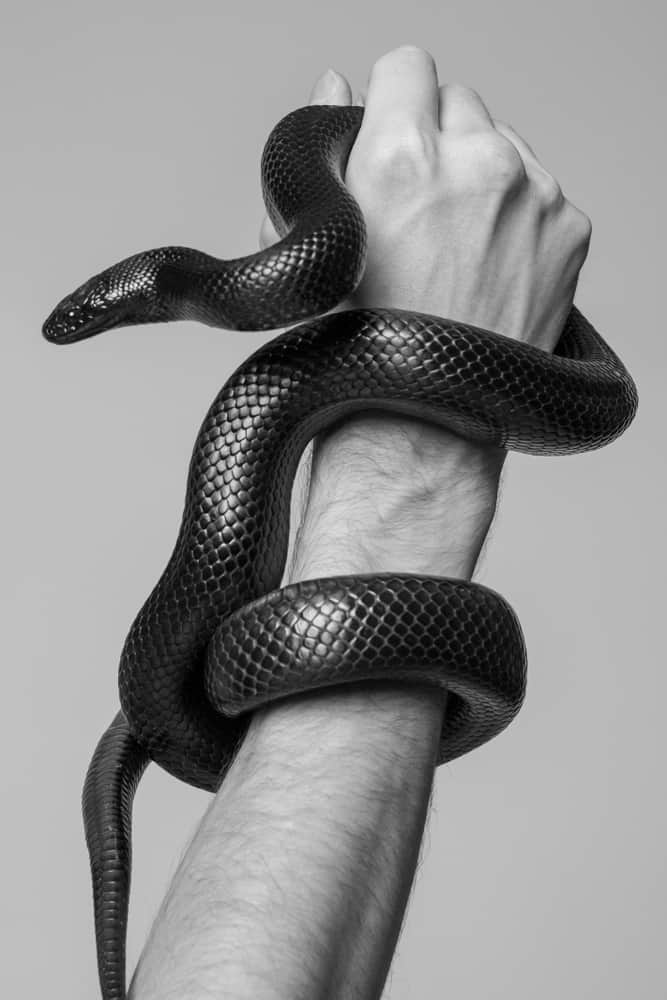 Having talked about the characteristics of black snakes and the significance snakes have according to a variety of cultures around the world, now we can look at how to interpret seeing a black snake in a dream.

To interpret a dream correctly, it is important to think about several things.

First, you need to think about the situation in which you saw the snake in your dream. Where were you? What were you doing? What was the snake doing? And how did you feel?

The way you feel about black snakes in general as well as the specific context of the dream will give you clues about what the dream means to you, and then, by allowing your intuition to guide you, you will arrive at the correct explanation.

So now let’s look at some common black snake dreams and what they mean.

1. Seeing a black snake in dream

Sometimes we don’t remember much detail from our dreams, and when we wake up, we can only recall snatches.

If you remember seeing a black snake in a dream but don’t remember much else, it can be hard to determine its meaning, but your intuition and current situation in life can guide you.

It could represent darkness or negativity surrounding you, and the dream could be telling you to stay alert to not let these negative powers influence you. The message could be to trust in yourself and your self-sufficiency to overcome any troubles or dangers you face.

Alternatively, a black snake appearing in a dream could be a message that you are about to go through a period of rebirth and that a new phase in your life is about to start. So, like the black snake emerging from its old skin, you should be ready to embrace the change.

2. Being bitten by a black snake in dream

If a black snake bites you in a dream, it is a clear message that something or someone is doing you harm in your life.

If you experience this dream, it means you urgently need to assess the people around you and any negative situations you are in and then make changes before it is too late.

3. Finding a black snake near you in dream

Finding a black snake near you unexpectedly could mean you have suddenly become aware of negativity or darkness in your life and that the situation has crept up on you without you realizing.

In this case, having realized, it’s now time to make the necessary changes to improve the situation.

However, if you are near a black snake in your dream and are unafraid, it means that you are in control of the negativity and darkness around you and that you won’t let them harm you.

4. A black snake on your body in dream

Having a black snake on your body in a dream means there could be some problems in a relationship with someone very close to you. Take time to examine your most important relationships and evaluate any negativity that you might not have noticed before.

This dream could be related to your marriage, and it can help warn you to find a solution to your problems before it’s too late.

5. A black snake in water in dream

Black snakes in water are well hidden, and seeing one in your dream may be a warning that there are problems in your life that you are not yet aware of. If you have this dream, take time to reflect and analyze your life to see where the hidden threat could be coming from.

6. Being chased by a black snake in dream

This dream may represent a negative or unwanted influence in your life that you feel you can’t escape. You may feel helpless in the dream, but in real life, rather than panicking, you can use calm meditation and reflection to find the right solutions to your problems.

7. Killing a black snake in dream

If you dream of killing a black snake, it can have several meanings.

As we have seen, black snakes can represent danger and fear. Furthermore, they can also represent dark energies or malicious people around you, and sometimes they can be associated with anxiety or depression.

If you are feeling anxious or depressed in your life, killing a black snake may show you that you have finally rid yourself of the people or the situations that are upsetting you, in which case, it may mean you will start to feel better soon.

On the other hand, if there is something you are afraid of in your life, killing a black snake in a dream could represent you overcoming your fear.

Another possible interpretation is that the black snake represents your enemies or people who mean to do you harm, and that killing it in your dream means harm will come to your enemies instead of to you.

8. A dead black snake in dream

Seeing a dead black snake in a dream can be similar to killing one yourself. It may mean that your troubles, whether with negative people, danger, dark energies, anxiety or depression, will soon disappear by themselves.

9. Lots of black snakes in dream

Being surrounded by lots of black snakes could mean you are feeling overwhelmed by the negativity in your life. Perhaps you feel that lots of things are going wrong at the same time and you are powerless to control them.

However, the best way to deal with this kind of situation is to stay calm and deal with problems one at a time. This will give you the best chance of resolving all the issues and getting your life back on track.

Trust your intuition to help you interpret your dream

As we mentioned above, dreams are personal and subjective, and interpreting them can be complicated.

However, if you consider the circumstances of the dream and how you felt when you saw the black snake and then apply it to things that are happening in your life at the moment, through meditation and reflection, your intuition will lead you to the correct answer.